Andrew Gordon has been a folkie for as long as he can remember. Brought up listening to the music of The Corries, Andrew developed a deep love of Traditional (and not so traditional) folk music. He started playing when he was 13 and had his first solo performance at 17 supporting Gaberlunzie in The Kings Arms, Perth.

Like many Scottish musicians, Andrew remembers back to the days when the family and neighbours would gather at Hogmanay, to drink, sing songs, and make merry. It was this community aspect that first led Andrew to get involved, and he became a regular at sessions around Perthshire in his early career. Things really began to take of for Andrew in 1999 when he played his first overseas gigs, visiting San Francisco and racking up 9 gigs in 3 weeks.

Andrew steadily increased his profile, and the opportunity to live and play in North America proved too exciting to turn down and Andrew moved to Toronto in 2004. While there Andrew played regularly in the city, as well as performing in Collingwood, Sarnia, Grand Rapids, Kalamazoo, Holland, South Bend and New York, both solo and as part of The Mighty Fine Pair. Andrew returned home in 2005, and has gone from strength to strength, playing all over Scotland, as well as touring in Europe. In 2011 Andrew was lucky enough to get several support slots with Skerryvore and one with The Red Hot Chilli Pipers.

Andrews’ music features a rich mix of traditional and contemporary Scottish songs. Some Irish, Canadian and English tunes also make it into the set. Folkingcool.co.uk said there was something compelling about Andrew’s music and passion while singing. Fellow musician Brian Higgins has always been a fan of the “robust” rhythms on both guitar and bodhran that Andrew uses to accompany his distinctive and passionate singing. Andrew himself is well known for thinking that one of the reasons audiences get behind his music is that he “gives it some welly”.

The last 3 years have been very successful and Andrew has been playing more and more venues, racking up ove100 gigs each year. A new CD is currently in the works too. 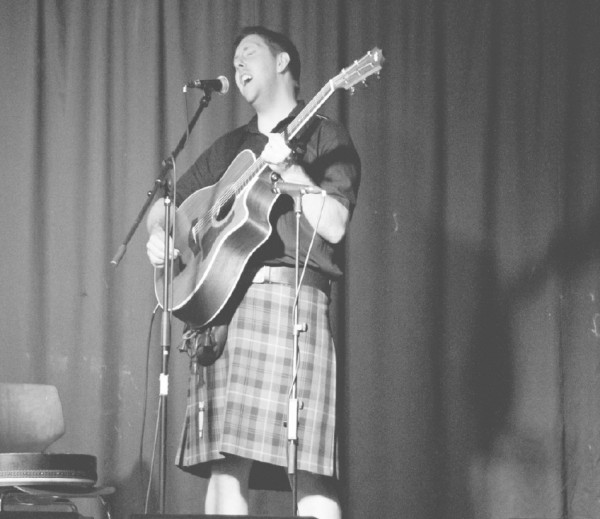