“They blow down the walls. Dim the lights, turn up the stereo, and let the house party begin” —Guitar Player

“Lil’ Ed And The Blues Imperials throw down old-style house-rocking shuffles, duck-walking struts and stomping rhythms as if marching down the tabletops at an all-night club…fearsome” —The Chicago Tribune

From smoking slide guitar boogies to raw-boned Chicago shuffles to the deepest slow blues, guitarist/vocalist/songwriter Lil' Ed Williams is an awe-inspiring master bluesman. He and his blistering, road-tested band, The Blues Imperials—guitarist Mike Garrett, bassist James "Pookie" Young, drummer Kelly Littleton—are celebrating 20 amazing years together. Live, Lil' Ed And The Blues Imperials simply can't be beat as Ed breaks out the deepest back-bends, the highest toe-walks, and the most authentic electric slide-guitar blues being played today. Not since the heyday of Hound Dog Taylor & The HouseRockers has a Chicago blues band made such a consistently joyous, rollicking noise.

Lil' Ed boasts a direct bloodline to blues history—his uncle and musical mentor was the great Chicago slide guitarist, songwriter and recording artist J.B. Hutto. According to The Chicago Tribune, "Williams represents one of the few remaining authentic links to the raucous, pure Chicago blues." The Associated Press agrees, stating, "Williams fills Chicago's biggest shoes with more life and heat than anyone on stage today." Adding to the legend is Ed's storybook rise, taking him from working in a car wash to entertaining thousands of fans all over the world. In 2006 he made multiple appearances on Late Night With Conan O'Brien (including a hilarious film with Lil' Ed teaching Conan how to play the blues) culminating with Lil' Ed on stage jamming with O'Brien in front of a television audience in the millions.

Born in Chicago on April 8, 1955, Ed grew up surrounded by the blues. He was playing guitar, then drums and bass, by the time he was 12. Ed and his half-brother Pookie received lessons and support from their blues-playing uncle, J.B. Hutto. "J.B. taught me everything I know," says Ed. "I wouldn't be where I am today without him." Ed and Pookie spent their teen years making music together, and in 1975 formed the first incarnation of The Blues Imperials. They played their first gig at a West Side club called Big Duke's Blue Flame, splitting the $6 take four ways. Over the next few years, the group played every club in the neighborhood, but they still needed day jobs to pay the bills. Ed worked 10 hours a day as a buffer at the Red Carpet Car Wash. Pookie drove a school bus. Night after night they played their roaring brand of blues in tiny clubs, and eventually the word reached Alligator president Bruce Iglauer.

At the time, Iglauer was looking for local talent for The New Bluebloods, an anthology of some of Chicago's younger blues musicians. "Ed and his band had a good reputation," recalls Iglauer. "I had only seen them live once or twice. I knew Ed was a hot slide player, but I had no idea what he and the band were really capable of. I just knew that their music reminded me of Hound Dog Taylor and J.B. Hutto, two of my favorite musicians. It seemed like having a band this rough and ready would be a nice change of pace for the anthology, so I asked them to come down to the studio and cut a couple of songs. I never expected what happened."

What happened is not supposed to happen. Not in real life anyway. The band—never having been in a recording studio before—treated the studio like a club, playing live to Iglauer, the engineer, and all the people on the other side of the control room glass. After Ed recorded just two songs, the Alligator staffers in the control room were on their feet begging for more. Two songs later, with Ed doing his toe-walks and back bends, even the engineer was dancing. Iglauer offered the band a full album contract on the spot. The end result of the session was 30 songs cut in three hours with no overdubs and no second takes. Twelve of those songs became the band's debut album, Roughhousin', released in September of 1986.

The national press reacted with overwhelming amazement. Feature stories ran in Spin, Musician, The New York Times, The Los Angeles Times, The Washington Post, The Boston Globe, The Chicago Tribune and dozens of other publications. The Village Voice declared, "Roughhousin' just may be the blues album of the year." Quickly, the band went from playing local bars to clubs, concert stages and festivals coast to coast, giving national audiences their first taste of the band's propulsive boogie blues and wild stage show. The band played The Long Beach Blues Festival, The San Francisco Blues Festival, The New Orleans Jazz & Heritage Festival and many others before heading off to Europe, Canada and Japan. Spurred on by the band's rowdy performances, a legion of fanatical fans, proudly calling themselves "Ed Heads," eagerly spread the word.

Lil' Ed And The Blues Imperials' next two releases, 1989's Chicken, Gravy & Biscuits and 1992's What You See Is What You Get, brought them to more people than ever before. They toured Australia, then went back to Europe before joining The Alligator Records 20th Anniversary Tour. That tour teamed them with blues greats Koko Taylor, Elvin Bishop, Lonnie Brooks and Katie Webster at sold-out concert halls and showcase clubs. Highlights of the tour are captured on the 2-CD set, The Alligator Records 20th Anniversary Tour. Night after night, Ed's set was a barn-burner. The New York Times raved, "Raw-boned, old-fashioned Chicago blues has a new young master—Lil' Ed Williams."

After years on the road, the stress of touring and recording began to take its toll. Ed broke up the band and, for the first time, truly put his life together. While off the road, he recorded two albums for Earwig Records: a collaboration with his old friend (and original Blues Imperials guitarist) Dave Weld and an album with Chicago vocalist/bassist Willie Kent. After getting his life in order and defeating his personal demons, Lil' Ed reformed The Blues Imperials in 1998, to the great delight of blues fans everywhere. They returned home to Alligator and released Get Wild! in 1999 and Heads Up! in 2002 to widespread enthusiasm. The Village Voice exclaimed, "These Chicago racket masters give a good name to crazed sloppiness. They're about going too far and pulling it back just in time."

The Washington Post describes Williams' music as "contagious wildness." The Philadelphia Inquirer expresses it as "raucous and hugely entertaining." But no matter how you describe it, Lil' Ed's seriously inspired music will take you on a fast trip from your chair to your feet. Now, with Full Tilt and a schedule that will take the band on another non-stop tour across the country and across the ocean, Lil' Ed And The Blues Imperials will continue to rip, roar, rock, roll, bend and fully tilt into the hearts, minds, souls and dancing shoes of Ed Heads all around the world. 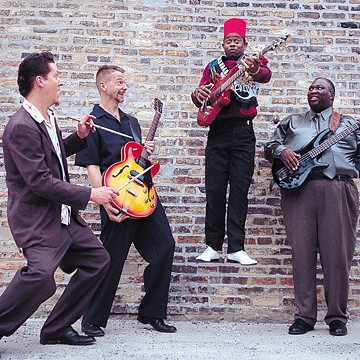